Leslie writes:  In 2013, for almost two weeks, I stayed in Camp Film City, the NATO Kosovo Force Headquarter Camp, with the Canadian officers serving in Operation KOBOLD. My experience with the CFAP exceeded my expectations. This was in large part due to the warm welcome, cooperation and support that I received from the Canadians officers with whom I was embedded.  The CFAP provided me with an opportunity to learn about the military in a unique “feet on the ground” way. It also gave me access to locations that I would not otherwise be able to photograph.

I will give a brief overview of the program’s mandate and history, and also the application process.  I will also discuss the work that has resulted from my deployment, some of which will be shown in the CFAP exhibition at the Diefenbunker.http://www.cmp-cpm.forces.gc.ca/dhh-dhp/gal/ap-pa/index-eng.asp

Bio: Photographer Leslie Hossack was born in Winnipeg. She lives in Ottawa and spends time every year in Vancouver. Recently Hossack completed major studies of historic architecture in Vancouver 2008-11 and 2013-14, Paris 2009, Berlin 2010, Jerusalem 2011, Moscow 2012, Kosovo 2013, London 2014 and Normandy 2015. Her work explores memory and commemoration and is driven by an insistent examination of the singular question of simple human survival. Hossack holds a BA from the University of Toronto and M Ed from the University of Ottawa. She studied fine art printmaking at the School of the Photographic Arts: Ottawa and has taken courses at Emily Carr University of Art + Design. Her images have been exhibited across Canada and have appeared in numerous publications, and her work is held in public collections in Canada and in private collections at home and abroad.

Leslie launched a new book on November 8: TESTAMENT: Leslie Hossack in Kosovo, at the Diefenbunker, Canada’s Cold War Museum in conjunction with the opening of the CFAP exhibition: “Group 6: the Canadian Forces Artists Program, 2012-2013,” curated by Laura Brandon.  This exhibition, which included Leslie’s photographs, was shown at the Diefenbunker, from November 8 2015 to January 31 2016.

Maria writes: Last year I went to Mexico and found four art schools interested in having a workshop on print making in exchange for a homemade meal. I gave two workshops in Oaxaca and two in Mexico City, in universities and graphic art centres. I learned a lot about artists and artistic landscape in these two amazing cities. I will show photos of the workshops and will talk about my experiences during my visit.

Bio: Maria Gomez Umaña holds a BFA from Concordia (1984-87) and a MFA from Northumbria University, UK (1994-95). She has lived in Ottawa for 12 years where she has taught art at Montessori Bishop Hamilton School, Algonquin College, and Outdoor Learning Centre at Carp. She worked for the Coalition of New Canadians for Art and Culture. Maria was granted a residency program at Art Place for 2016, and showed new work at Chinatown Remixed at the Kowloon Market this year.

This presentation explored how artists and curators alike bring about the Canadian art world through their everyday work (and workplace writing) practices. Drawing from her recent study, “Art working: An institutional ethnography of the art world,” Janna explored the differences between experiential literacies—that tell individual experience—and institutional literacies—that organize the world through concepts (Darville, 1995, 2009) . She also invited dialogue about what it means—or perhaps what it takes—to bring about the institutional art world.

Bio: Janna Klostermann is an Ottawa-based performer and researcher. She dabbles in poetry, comedy and sociology. To find out more about her work, visit www.janna.klostermann.ca 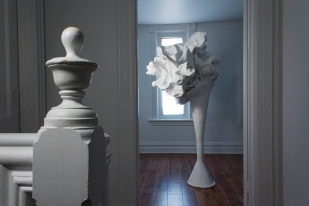 Meredith writes: For my talk at RIA, I will be discussing my recent body of work that pairs sculpture with photography to explore how one medium is implicated in the development and interpretation of the other. A launching point for this work was the site of a century old home in Hull, Quebec and the receipt of a bouquet of fake flowers. Alongside my work in progress, I will share some historical examples of how the photography of sculpture has affected the practice of art history.

Sharon writes: My current body of work, “In the Company of Common Objects”, is about de-familiarizing ordinary objects and experiences in order to make them strange. I look for moments when inanimate, everyday things seem to come alive. Using a variety of animation techniques, I abstract their form, slow down time, and/or move ordinary objects in ways that replicate the twitchings and squirmings of living things. Recording the event to video, I then project it onto sculptural forms. While the objects retain some of their real-world identity, they become illogical and their juxtaposition against each other or their environment generates a tension – a cognitive stretching – that gives rise to various readings of the work.

The plan for this RIA talk is to install at least three of the actual animation/sculptural hybrids, and present others in documentation during the talk.

Sharon Katz http://www.sharonkatz.net/  is a Canadian visual artist whose principle medium is animation. Questioning the line between inanimate and animate, she looks for moments when ordinary objects seem to come alive or have agency.From drawing needles pushing through fabric to animating pink panties, from beef and bone memento mori  to a short film about the sensual bonding of a shirt collar and tie, her domestic world takes curious, material form in the work.Active, sketchy lines; a fascination with texture; the directness of a minimal aesthetic; the intimacy of up-close; these elements identify her practice from the simplest of drawings to the most complex of short films and new media installations.

She has a BSc in biology and recently completed an MFA. http://www.sharonkatz.net/

Adam writes: In November 2014, I took part in an international curatorial residency held in Valparaiso, Chile. The residency emerged out of a travelling photo-based project titled “Disciples/“Discípulos”, produced by La Petite Mort Gallery (Ottawa) in partnership with the Parque Cultural de Valparaíso, (Valparaíso, Chile). Working alongside project director Guy Berube, the residency resulted in an exhibition focusing on the stories of twelve former political prisoners of the Pinochet regime. On November 19, the first iteration of the project opened as a permanent installation in the former public prison of Valparaiso. During the time of the Pinochet’s rule, this same prison would detain hundreds of political resistors including the twelve subjects of the exhibition. Overall, the “Disciples” project outlined the complexities of communicating histories between insiders and outsiders – a distance that is held both within and between cultures, languages and generations.

I will share my experiences of the residency and discuss my recent and upcoming curatorial projects including those produced in partnership with Guy Berube.

Adam Barbu  is an independent writer and curator living in Ottawa. Later in the year he will begin his M.A. in Art History at the University of Toronto. He has produced contemporary art exhibitions nationally and internationally that explore themes of disclosure and resistance. His current research focuses on “post-AIDS” discourses, and early minimalist art.

Chris Simonite’s Salon was the first one in a new series of presentations by artists who are recent graduates of the MFA program at the University of Ottawa and who decided to stay here. We are looking forward to hearing more about their practice, and just a bit curious about their choice of cities.

Chris writes: The primary targets of my art practice are gender stereotypes, particularly those surrounding contemporary masculinity. Over the course of my Masters of Fine Arts at the University of Ottawa, I focused on the ubiquitous cultural concept of the ‘real man,’ from which I created an alter ego: a fictional, satirical country/rock star called Stan Dickie. This character allowed me to point my satirical lens at the absurdity of patriarchy from the point of view of a male artist. For this artist’s talk, I will give an overview of my art practice beginning with a brief look at my undergraduate work at the University of Manitoba but with a particular focus on my MFA work. I will also talk about how I would like to expand and modify my current practice over the next few years.

Chris Simonite is an artist and musician in Ottawa, Ontario, Canada, who utilizes live performance, video, animation and drawing among other media to question 21st Century narratives. The main focus of his work is a humourous, often satirical construction/deconstruction of masculinity, religion and popular culture. He received his BFA from the University of Manitoba in 2010 and his MFA from the University of Ottawa in 2012. Simonite has had his work exhibited both in Canada and internationally. One of the goals of Simonite’s art practice is to help bring humour, an under-utilized art form, to the forefront in contemporary art.

Judith writes: Elsewhere, a Living Museum, occupies three floors of an old building that was a thrift shop for many decades. It has become a museum unlike any other. For 10 years artists have created on-site installations from objects in the former thrift shop. Discarded domestic items ranging from dolls to vintage clothing, bolts of fabric, toys, books, furniture, army surplus, and much more have been organized and transformed into art that layers every wall, ceiling and corner.

I returned to Ottawa with an artist’s book project to complete – a hybrid travelogue/journal – that traces my Canadian cultural tourist’s search to understand Elsewhere’s place in Greensboro’s community, history and possible links to the civil rights museum three blocks away, on the historic main street.

Judith Parker is a curator, writer and art historian who lives in Canada’s capital, Ottawa. The city is named after indigenous traders, the Odawa, who met European explorers travelling the Kitchesippi River. Judith often curates interdisciplinary contemporary exhibitions in non-traditional places where artists respond to specific cultural sites or historic artifacts. Every August, she creates collaborative performances, aka ‘forest encounters’, in the Ontario wilderness with R. Murray Schafer’s Wolf Project.