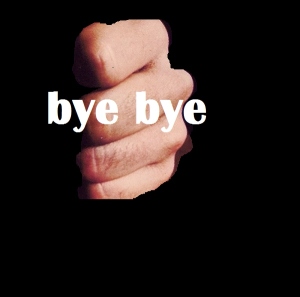 Michael Davidge, a relative newcomer to Ottawa, gave an introductory overview of his interdisciplinary art practice, with a focus on some of his most recent projects: Pilgrimages Redux, a performative lecture at the Agnes Etherington Art Centre; and Little Help, a musical composition he prepared for the 2013 Edition of the Tone Deaf Festival of Adventurous Sound Performance in Kingston, Ontario. Intertextual in nature, Davidge’s art draws on strategies of quotation and improvisation with reference to musical idioms.

Pilgrimages Redux was an illustrated tour of a trip I made to Mount Rushmore, presented in conjunction with Vincent Perez’s account of his journey on “The Way” to Santiago de Compostela. Through spoken word and printed matter, this performance reflected a dialogue about our travels and the themes which drove our pilgrimages in the first place: curiousity, community, communication and context.

Living in Ottawa has inspired me to foreground more readily the political dimensions of my performance work. For Little Help, I took as my source material my neighbour Prime Minister Stephen Harper’s performance of the Beatle’s “With a Little Help from My Friends.” Through music, political antagonism is shifted to the field of agonism or play.

Michael Davidge is an artist, writer, and independent curator who lives in Ottawa, Ontario. He holds degrees in both English Literature and the Fine Arts. His writing on art and culture has appeared in Parachute, C Magazine, and BlackFlash, among other publications.

Retro-Progressive: Personal Impressions of the 55th Venice Biennale, with a focus on the artists featured at the pavilions of Canada, England, Egypt, New Zealand, Germany, Ireland, Monaco and New Foundland, and including such collateral events as Fragile at Le Stanze Del Vetro. 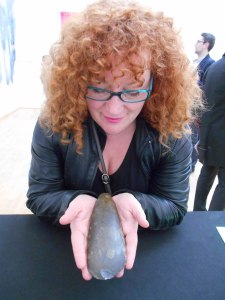 In May and June of 2013, Marcia Lea was one of 8 curators who travelled with the Ontario Association of Art Galleries (OAAG) to the 55th Venice Biennale.  The OAAG was established in 1968 to “be a vital and effective advocate for Ontario’s dynamic public art galleries, serving and representing our members across the province as valued and essential centres of art and learning.” To this end, OAAG developed an intensive program of artist and curator guided tours of the national pavilions in Venice, as well as professional meetings with managers, director and professors in Venice, Florence and Rome for the 8 delegates.  Lea will be sharing a brief summary of her experiences with this program.

Marcia Lea is an independent curator and artist based in Ottawa, Canada.  She holds a Masters of Fine Arts Degree from the University of Ottawa (2010).  After completing her Masters she accepted a position as Executive Director and Curator at the Glenhyrst Art Gallery of Brant in Southern Ontario.  In 2013 she returned to Ottawa as an independent curator and began working on the Lights On! Exhibition with Petra Halkes and Cube Gallery.

Lea’s artistic research has included many issues, most recently of gender and power statements.  She has had numerous solo exhibitions including, Portrait of a Fortress that was displayed at the Diefenbunker: Canada’s Cold War Museum in 2006-2007.  In 2010 the artist’s thesis exhibition, Sex, Bombs and the Cold War was mounted at the artist-run centre, Axe Neo7 in Gatineau, Québec.  In 2011, at Ottawa City Hall she exhibited her series Gender Power Agenda.  Lea’s paintings have been exhibited across Canada, the United States and in Great Britain, and her work is included in many prominent collections.

If you have never visited FIELDWORK yet, you’ll be in for a pleasant surprise! Since 2008 Susie Osler (with other Collective members Erin Robertson, Chris Osler, and Chris Grosset) has invited artists to create site-responsive art installations for spaces in and around a small field on her farm near Perth, an hour west of Ottawa.  Over thirty art projects have been created for the site since then. The unique space is open to the public at all times. FIELDWORK’s interest in animating the land by encouraging creative interaction with the space and by hosting community events/workshops, is ongoing and continues to evolve.

Aside from Coordinating FIELDWORK, Susie is a ceramic artist, writer, and gardener.  She has long been interested in the ways in which we experience and interact with nature and the land around us.

Susie Osler’s Salon on FIELDWORK was an engaging event that was well-attended. Some of the Ottawa artists who have participated in the project in the past were also  present to talk about their work on the site.Thank you, Susie, for bringing the country into the city!

FIELDWORK has been generously funded by the Ontario Arts Council.

Although it wass already a year ago that Stephanie Nadeau took over from Marie-Camille Lalande at the Ottawa Art Gallery’s public programs department, she was still “new in town” to many of us, and few knew anything about her art.  So I was happy that she accepted my invitation to talk about her work at this Salon. Stephanie also participated in the RIA House Tour: Art in Odd Spaces, May 3 and 10 2014.

Stephanie Nadeau  is an artist, educator and cultural worker based in Ottawa. She studied at the Ontario College of Art and Design (BFA 2005) and the School of the Art Institute of Chicago (MFA 2008). Her interdisciplinary art practice includes works on paper, performance art, sound and media installation, and collaborative community projects. Her work has been exhibited in Canada as well as internationally, and is part of several collections including the Joan Flasch Artist Book Collection, the Museum of Contemporary Art Chicago Collection, and The Banff Centre Library and Archives Artist Book Collection. Stephanie currently works at the Ottawa Art Gallery as the Curator of Public, Educational and Community Programs.

I have often explored my own family history in painting, photography and also video, and my current work is based on my father’s military history. In August 2013 I spent three weeks with the Canadian Forces Artists Program travelling across Northern Canada and the High Arctic. I sought to retrace areas of the North that my father flew over as a pilot with RCAF Photo Squadrons in the 1940’s and 1950’s.  These Squadrons were tasked with photographing millions of miles of northern Canada in order to create the first accurate maps of the North; the resulting maps would be used for years for issues of sovereignty, navigation, exploration, and development. I am using the many photographs and videos I took to explore contemporary activities and environmental changes in the Arctic, in relation to the early images held by the National Air Photo Library. The images from my flights in helicopters, Twin Otters and Hercules, stretching from Whitehorse, Yellowknife, Resolute Bay and Iqaluit, along with archival photographs from the early Photo Squadron flights, are the source of a series of paintings and photo installations that will be shown in Montreal next winter.

Leslie Reid was born in Ottawa, and returned here after studies at Queen’s University and in England at the Byam Shaw School of Art, Chelsea College of Art and the Slade School of Fine Art to teach at the University of Ottawa. She is now Professor Emerita.

Her recent work, from residencies at the Cape Pine Lighthouse, Newfoundland, explores themes of loss, refuge and survival in an isolated and uncompromising environment, through tracing local family histories. Work from this series was shown in Builders: The Canadian Biennial, at the National Gallery in 2012-2013.  She has had many solo shows, in Canada, the USA, England and France, as well as representing Canada in the Paris Biennale.

With the launch of the North-South-East-West project in 2003 ( see details at www.northsoutheastwest.ca and the interactive medicine wheel at www.medicine-wheel.co ) Thompson received invitations to exhibit his work in North America, Asia and Europe.
His 45 minute talk on October 8th 2014 will include a travelogue of shows in Canada, USA, the Philippines, Taiwan, Thailand, Australia, Croatia, Serbia, Montenegro, Russia and France, as well as a guided tour of the North-South-East-West interactive video, with emphasis on the relevance of medicine wheel teachings to contemporary life styles by inter-relating the following 5 concepts:
– the 4 cardinal directions (East, South, West, North),
– the 4 stages of life (birth, youth, adulthood, old age),
– the 4 challenges of life (survival, vision, path, wisdom),
– the 4 positions of the sun (sun rise, noon, sunset, night) and
– the 4 seasons (spring, summer, fall, and winter).

Bio: Ottawa media artist Graham Thompson discovered midlife that he was a Cree Metis with Red River family connections to British explorer Samuel Hearn and Metis rebel leader Louis Riel. This genealogical research lead to the study of Aboriginal Traditional Knowledge. His work in Algonquin talking circles and sweat lodges triggered, with a generous grant from ED Video, the creation of the North-South-East-West Project, an interactive Web-based Medicine Wheel. Thompson has won awards for his media work from the European Film Festival MEFEST, the International Digital Art Awards of Melbourne Australia, Cool Site of the Day of New York and the Common Wealth Vision Awards of England. 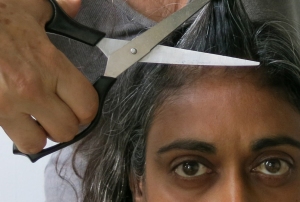 Hair in the Sikh religion is a symbol of respect for the perfection of God’s creation. The Samson and Delilah story, of the Bible, reveals hair as the secret of Samson’s strength. In fairy tales like Rapunzel and the Persian tale of Rudāba, a woman’s tresses beguile and enable her lover to reach her in the tower. In most cultures of the world, women and girls are often admired for their hair as a sign of beauty. Indian women’s hair, in particular, is highly valued as evidenced by TrueIndianHair.com of NYC, whose business “provides its diverse clientele with healthy, luxurious, 100% virgin cuticle hair culled directly from donors in East Indian Temples. The hair strands are handpicked, sterilized, and sorted for the best quality and textures in order to provide you with a superior product.” Women and their hair are questionably exploited for commercial purposes. Quality hair is also a need of cancer patients, seniors and others who desire conformity in a society where a lack of hair is considered unattractive, connoting shame, punishment, and disease.

HAIR CUT PIECE (2014) was a performance inspired by Yoko Ono’s canonical performance, Cut Piece (1964). I submitted myself to an extreme haircut by artist collaborator Svetlana Swinimer and invited the audience to participate by asking: “Are you ready to give a lock of your hair for someone else’s beauty?” Svetlana cut a lock of hair from anyone who offered. She also continued to cut my hair over two days of the DUMBO Arts Festival in Brooklyn, NY, until there was no hair left to cut. The work addresses sacrifice, who sacrifices, for what and why.

We will present video documentation of Hair Cut Piece and welcome your questions and comments on the process, the performance and the impact.

Rachel Kalpana James’ videos, installations and performance art are inspired by her South Asian heritage and immigrant history to explore the construction of identity and belonging in contemporary society. www.rachelkalpanajames.com

Originally from Russia, Svetlana Swinimer uses metaphors and symbols in painting, sculpture, video, photography, installation and performance with a focus on humanity and science.

James and Swinimer are members of the Enriched Bread Artists, Ottawa Canada.